KAMPALA-SHIFTMEDIA- When a Leader shows discontent among his subjects, rejections emerge.

On Thursday  we reported in these pages how the suspended Uganda National Liberal Union (ULITU) President General Evans Mutesasira Kaganiizo was reportedly bungled out like a ‘chicken thief’ from the Public Service Negotiation and Consultative meeting.

We have since established that Kaganiizo was suspended as ULITU President General for among others insubordination, abuse of office, intimidation, causing financial loss and lack of respect.

In a rebuttal, the ULITU National Treasurer Mboizi Michael Max described Kaganiizo as a ‘crook’ and wanted “thug’ who is struggling to survive. “Kaganiizo had become a nuisance at ULITU. He had, as President General usurped all powers, something that is against our constitution,”said Mboizi. “He was the President General, National Treasurer, as well as General Secretary. Any money that we would collect as a union from our members ended up in his pocket.”

Apparently according to Mboizi, Kaganiizo was dismissed from the Uganda National Teachers Union (UNATU) after he embezzled funds when he served as UNATU Greater Bushenyi Vice Chairperson. He and 19 others later decided to form ULITU in 2010. Two of the 20 founding ULITU NEC members have since dropped off

“In 2020 during COVID period Kaganiizo stealthy organized a delegates conference with a sole purpose of having the General Secretary and National Treasurer thrown out. This mission backfired,” Mboizi told the press.

He said much as Kaganiizo had promised each of the delegates, most unsubscribed ULITU members,  majority from his Bushenyi area shs150,000 each and transport refund, he failed to pay prompting police to hunt for him.

His trouble we are told started when he went on social media and sacked the General Secretary Erima Jackson and the National Treasurer for demanding accountability from him. “The original 18 NEC members who started ULITU demanded for a council meeting to explain why the two officials were sacked.” “After consultation with COFTU, our mother Union and the Ministry of Gender, we were cleared to hold the NEC meeting,’ said Mboizi.

The NEC meeting attended by 14 of the remaining 18 ULITU NEC members sat at Romeo’s hotel in Luzira on May 8th 2021 and unanimously suspended Kaganiizo as President General. According to resolutions signed by the members that we obtained, the NEC members resolved to suspend Kaganiizo until July 2021 to allow for investigations. 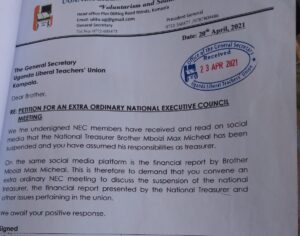 They also resolved to have all signatories of ULITU bank accounts changed immediately.

NEC also voted Christine Wadiko, the hitherto Vice President as acting President General. “He (Kaganiizo) must account for the shs6m he used from the union account. He also must return the ULITU Certificate of registration that he took from the office,” said Mboizi.

The funds are part of the cash he got from members, and support cash from some Workers Members of Parliament towards office rent and member mobilization countrywide. 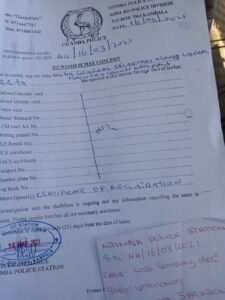 Erima Jackson the ULITU General Secretary said he wrote to the Registrar of Labour Union giving them the position of the NEC regarding booting of Kaganiizo as  ULITU President General. Its upon this instructions that Kaganiizo was bungled like a chicken thief out of the NC meeting on Thursday.

Officials who attended the council meeting said Kaganiizo lacked respect. “He was requested humbly to leave the meeting since he was under suspension, but he defied the orders. How can you defy your bosses’ orders? He deserved it,” said one union member who sits on the Council.

Another member said even after Kaganiizo was paid an allowance of shs400,000, he opted to remain adamant prompting police to throw him out.

Kaganiizo is also accused of not being a fully paid up member of ULITU since he doesn’t have any employment. “It is because of his bad manners that he is jobless. He was sacked everywhere he worked. He is now living hand to mouth,” said Mboizi

BLACKLIVES MATTER: Why the “White” Animosity against “Black” People? 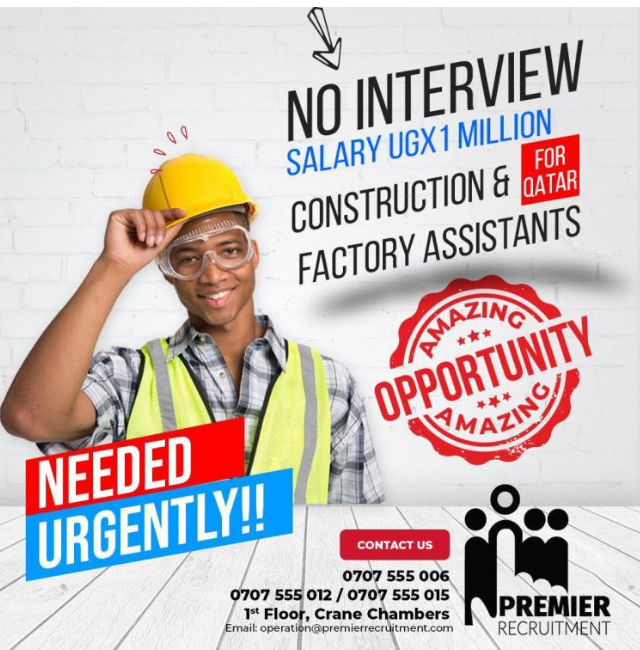 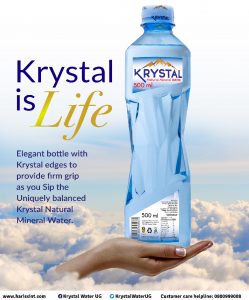